Snap to the Side 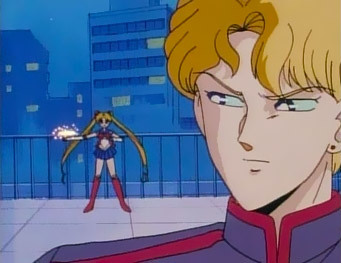 "Do you surrender?"
"I ONLY LOOK AT PEOPLE THROUGH THE SIDE."
— Chip Cheezum, Xin, Session #7
Advertisement:

Very prevalent in anime, whenever a person's opponent gets behind them, instead of turning around, their eyes will snap sideways. As anyone with any common sense will tell you, it doesn't work. However, it just looks so much cooler this way.

This is often accompanied by a close up of the person's face, or even the outside eye. There is also a calmer version used to demonstrate the fact that the observant character is well aware that the spy or stowaway is there. Yet another variation is used when the character is talking to someone with his/her back turned to them. If this happens, pay attention to what was just said, because it's probably important. Not that you can tell from behind.

Truth in Television, though: if you hear something behind you, your eyes will often reflexively flick towards the direction of the ear closest to the sound, even if you don't turn your head to look.

This trope is almost never played for comedy. If it's the Aside Glance, then it's not this. Compare Look Behind You.