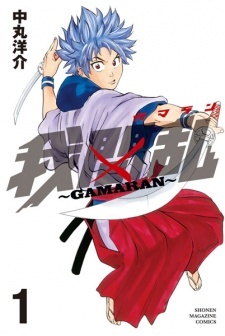 Gamaran (我間乱, Gamaran) is a shonen manga written by Yosuke Nakamaru and set in ancient Japan.

Long ago, there was the region of Unabara, also known as "The Demons' Lair", because many powerful warriors hailed from here, as well as countless martial arts of any kind. In order to choose a worthy ruler amongs his many sons, the Daimyo of Unabara Naomasa Washizu decides to start the great Unabara Tournament: each of his sons will hire a "Ryuu" (School) whose warriors will fight for their master in order to make them Daimyo and find out once and for all which style is the strongest.

The story focus on Naoyoshi, bastard son of the Daimyo who wants to clear his name (his mother wasn't a noble). Looking for the powerful swordsman Jinsuke Kurogane, the "Killer of a Thousand Men", he ends up hiring his son Gama, the young but skilled swordsman of the Ogame Ryuu. Along with allies and foes, Gama will fight his way to the top in order to make Naoyoshi the new Daimyo and show the world the might of the Ogame Ryuu.

In 2018, a sequel was published, under the name of Gamaran Shura, set two years after the end of the series, mostly focused on secondary character Iori Sengoku, as he's dragged in a grand tournament set up by the Shogunate and featuring the 100 strongest warriors recognized by the government, with the title of Strongest of the Land at stake. However, there's something more sinister in the air....

So far, Gamaran Shura has reached the tenth volume, though so far not a single scan has been translated.