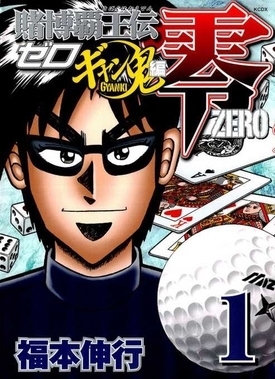 Gambling Emperor Legend Zero is by the same creator as Akagi and Kaiji, Fukumoto Nobuyuki. However, the gambles tend to be based around forcing the player to solve a puzzle set up by the house, rather than defeating other players in games. It also focuses heavily on the games themselves and very little on the psychology of the players, in contrast to Fukumoto Nobuyuki's other works.

Zero, having forged a group of noble bandits out of his internet Suicide Pact, works to steal stolen money back from the Yakuza. However, he is outsmarted and caught, but since the big boss, Zaizen, is looking for rep players to use in a massive gambling event between trillionaires, he agrees to let them go if they enter the Dream Kingdom that will be used to whittle down the prospective choices. Gambling ensues.

The manga "ended" with a cliffhanger and was put on hiatus for a while in favour of Kaiji's fourth series. In July 2011, news spread that Fukumoto is resuming it.

And, recently, he did resume it.