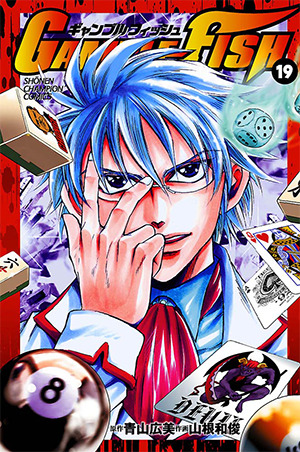 Gambling is Serious Business
Gamble Fish is a manga written by Kazutoshi Yamane and illustrated by Hiromi Aoyama. It was serialized in Weekly Shonen Champion from 2007 to 2010, and compiled into 19 volumes.
Advertisement:

Shishidou Academy is a boarding school reserved for the children of the financial and intellectual elite of Japan, where the future leaders and CEOs of the country are prepared for their future. As a result, the school is full of arrogant, aggressive, class-conscious people.

Enter Tomu Shirasagi, a mysterious fourteen-year-old boy with poor parents who transfers in. Soon after his introduction, he makes clear that his only reason for attending Shishidou is competing with other students in "fights of intellect" for money, starting with low bets and going progressively higher.

Not to be confused with Rumble Fish.