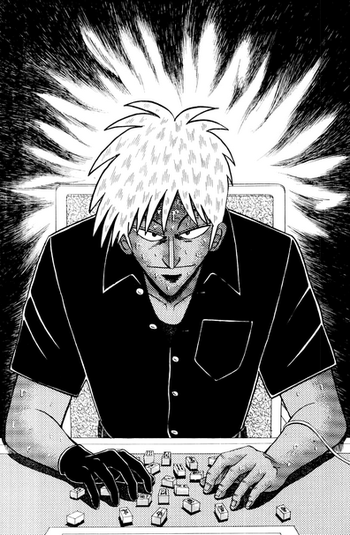 I sense no life in you. I know. I was like that a second ago.
Advertisement:

Tokyo, 1958. A 13-year-old kid, Shigeru Akagi, drives off a cliff in a rigged game of chicken, swims to safety and walks into a Mahjong parlor, where a man with heavy debts is gambling his life with the Yakuza. Despite having never played before, and given only a few minutes to learn the rules, he proceeds to crush his opponents. This becomes his modus operandi: breaking hardened gamblers into shells of their former selves with a deadly mix of intimidation, cunning, and monstrous luck. This is the start of the genius Akagi's legend in the underworld.

Undoubtedly the most popular of Fukomoto's works, this series laid several of the tropes that would go on to be reused in Gambling Emperor Legend Zero and Kaiji. It's also well known for being almost entirely about the battle between two men: Akagi himself and the series' main villain, Washizu. The duel went on for over twenty real life years, and comprises over half of the manga. While it's an exhausting read, this mental battle is truly epic despite taking place in a dark room while huddled over a table.

It should be noted that this is a prequel to Ten, where an older Akagi is one of the major characters. See also Kaiji which so far is the only other manga by Nobuyuki Fukumoto to get an anime adaptation.