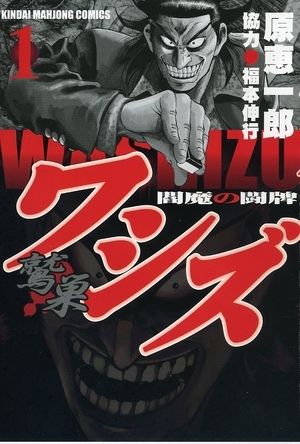 Prequel manga to Akagi. In 1945 post-war Tokyo is a city of ruin to Washizu Iwao, a man returning to Japan after mysteriously leaving the country and the police force in the middle of the Second World War, and he has taken it upon himself to reshape it in his image. Founding the financial consultation firm 'Kyousei' three years later, he begins a fierce crusade to take over Japan from the shadows using his greatest asset: his skill at mahjong. That, and the healthy dose of coercion, brute force and blackmail, of course.

What follows is a surprisingly good and downright bizarre spin-off manga about Washizu's sociopathic exploits with his trusty underlings, Hayabusa and his Secretary, as they battle the stock market, pirates, yakuza and everything in between in the seventeen years before the start of Akagi. The series was neither written nor illustrated by Fukumoto, who is instead credited as an assistant.