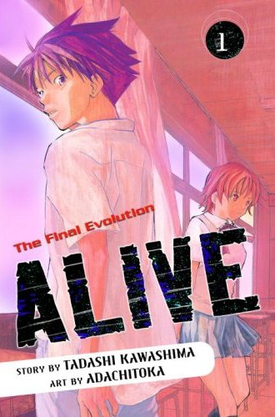 We were alive on this planet, then they arrived.
Advertisement:

Imagine The Happening turned into a shounen series.

Taisuke is an Ordinary High-School Student whose life is changed forever when a mysterious "suicide virus" spreads around the world and causes normal people to suddenly kill themselves. As he witnesses a young girl gleefully jump to her death, a strange thought goes through his head: "I'm so jealous..."

Weeks later, after the epidemic has died down, a couple of bullies at Taisuke's school are brutally murdered and his best friend Hirose is the prime suspect. To his horror, Taisuke discovers that the survivors of the suicide virus—those who contracted the virus but did not commit suicide—have begun to manifest destructive supernatural powers and are being gathered by an enigmatic man named Katsumata. Hirose turns out to be one of these "Comrades", and is brainwashed into joining their cause, kidnapping Taisuke's childhood friend Megumi as he flees north.

Determined to rescue Megumi and bring Hirose back to his senses, Taisuke leaves the city on his bike and pursues the "Comrades" to their gathering place up north. On the way he meets up with renegade Comrades Yuta and Nami- who reject the plans of Katsumata- and begins to manifest his own Comrade powers as he comes to grips with what it means to be "alive".

The manga, written by Tadashi Kawashima and illustrated by Adachitoka, was serialized from 2003 to 2010 in Monthly Shonen Magazine. While there were plans for an an anime adaptation by Gonzo, the studio suffered economic problems and cancelled the project in 2010

In spite of that, he succeeded in completing Alive while hospitalized.