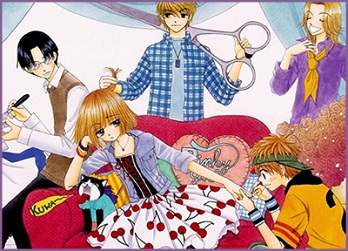 Beauty Popnote  Beauty Pop is actually the title of the first half of the series; the second half, after a short hiatus, was renamed Beauty Pop Stage 2 is a shoujo manga series by Kiyoko Arai, which ran in Ciao from 2003 to 2008. It was published in English by VIZ Media under their Shojo Beat label.

Kiri Koshiba lives out her days in peaceful lethargy, having fallen into an easy rhythm of working at her father's beauty shop and attending school. So calm are her days that she has no idea of the Scissors Project (alternately known as the "S.P."), a trio of popular boys who aspire to become the top name in Japan's makeover industry that frequently give the girls of their school makeovers... with exceptions. Any girl who lacks a properly balanced 'Beauty Factor' will be refused a makeover with no second chances to receive the prestigious honor of getting work done by the S.P. When Kanako, Kiri's best friend, tries to confess to one of the members, he rejects her while simultaneously accusing her of trying to bribe them into doing a Project on her and to Kiri, that makes it personal.

They have to have her on their team.

Thus begins the saga of Kiri and the Scissors Project, climbing up the ladder of makeover excellence, one satisfied customer at a time.