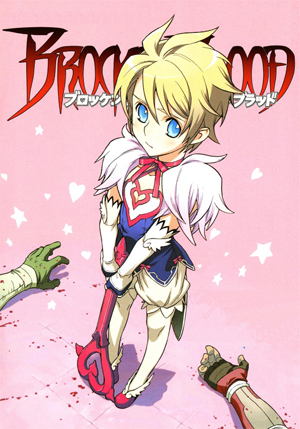 More dangerous than he looks.
Advertisement:

Brocken Blood is a seinen manga by Etorouji Shiono.

Kenichi Shurutsu, a 15-year-old high school student of German ancestry living in Japan, turns out to be descended from German alchemist Johan Schultz, whose bloodline confers magical abilities. So his (female) cousin Rena forces him to crossdress, so he can act as a Magical Girl and fight evil. And make lots of money. No, it doesn't even make sense in context, but that's OK, because this is a gag-driven parody that runs strictly on Rule of Funny.

The manga was serialized in Young King OURS from 2003 to 2012, and is licensed in English by J Manga (digital only).