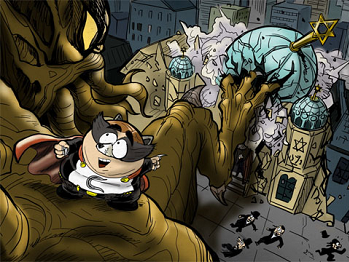 You may be evil, but you'll never be "tempting Elder Gods to sin" evil.
Advertisement:

So, you have your average Body Surfer or enslaving Evil Sorcerer, or similar Big Bad. Eventually, they aim to enslave or fuse with a Physical God or other powerful being beyond comprehension, often a Sealed Evil in a Can. But since Evil Is Not a Toy, surely they’ll end up swept aside by the Greater-Scope Villain, right?

Usually yes. But occasionally, they actually manage to pull it off! This is when a character takes forceful control over something vastly more powerful than themselves.

Not to be confused with Hijacked by Ganon or Hijacked By Cthulhu. Can involve Hypno Trinkets, Soul Jars, body swaps or Demonic Possession.

Differs from The Kid with the Remote Control in that this is a direct and hostile takeover of the target. Compare Olympus Mons, Grand Theft Prototype, Captured Super-Entity or Super Weapon, Average Joe.

Vilgax pretends to be Dagon's loyal follower, before draining its power and taking it for himself.

Vilgax pretends to be Dagon's loyal follower, before draining its power and taking it for himself.