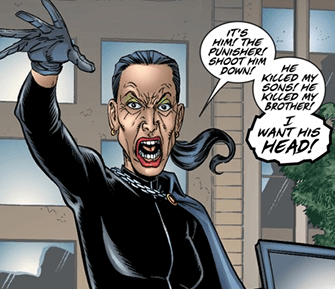 "In all my years of conquest... violence... slaughter... it was never personal. But I'll tell you now, what I'm about to do to your stubborn, annoying little planet — I'm going to enjoy it. Very, very much."
— Thanos, Avengers: Endgame
Advertisement:

Protagonists and antagonists are always fighting each other. It's generally accepted that there could be a few deaths, injuries, psychological trauma, and physical destruction over the course of their struggles in a story. However, sometimes motives can run deeper than simply the other person having opposing goals, and "struggles" can hit far closer to home and heart than is comfortable.

Family members (or even entire races, countries, and cultures) may have been decimated, either as part of a character's backstory or during the story itself. Homes may have been burned down, and lifelong dreams may have been crushed. However you put it, though, somebody's embarrassed, saddened, angry, or let down, and they believe somebody (most times they know who they want to exact retribution from, by the way) has to pay for it.

In short, this is where a character (or characters) has a very close, emotional investment in the story's conflict.

The Targeted to Hurt the Hero and Friendly Target tropes are invariably a setup for this. War Comes Home takes this idea and applies it an entire warring regime, especially if the hero's hometown is attacked by said conflict.

Usually eventually leads to "Not So Different" Remark. For a more specific form of this, see You Killed My Father. Often enough, This Means War!. If this is the impetus for the hero going on the journey to begin with, it's because The Call Knows Where You Live. When done to their home or base, the hero will usually take a moment to Watch Troy Burn. If the one for whom It's Personal finally gets to stare down the one who made it personal, expect an And This Is for... beatdown.

The Disposable Woman is a character who exists only to make It's Personal happen. When it gets personal, characters insist they must work alone.

One common variant is to order/trick allies aside to set up a one-on-one duel without interference. This can be risky, but the avenger wouldn't risk anyone else getting hurt—or someone stealing his precious right to do that particular kill himself!

If a character has this as his primary motivation rather than as part of another quest, then he's Not in This for Your Revolution.

Has nothing to do with "It" Is Dehumanizing.

It's Personal with the Dragon is a specific subtrope. Compare Berserk Button, when whatever personal thing committed elicits a sudden reaction from the person wronged or offended. Contrast when it's Nothing Personal, or at least the character(s) claim it's not.

The invocation of this trope in Real Life on the internet is almost the moment when any given Flame War or bout of Ship-to-Ship Combat becomes Serious Business, leading to behaviors such as cyberbullying and real-life harassment, because belief/feeling that an issue is a personal affront to someone or their "in-group" is often "justification" for engaging in such behavior.

After Bugs' trick is revealed, Elmer becomes enraged and unleashes the full power of his magic helmet on Bugs with intent to kill. He succeeds, but comes to regret it.

After Bugs' trick is revealed, Elmer becomes enraged and unleashes the full power of his magic helmet on Bugs with intent to kill. He succeeds, but comes to regret it.