Film / The Day After 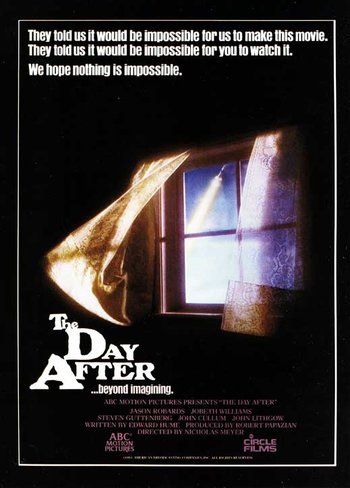 Apocalypse ...
The end of the familiar ...
The beginning of the end.
Dr. Russell Oakes: You're holding back hope.
Alison Ransom: Hope for what?! What do you think's going to happen out there? You think we're going to sweep up the dead and fill in a couple of holes and build some supermarkets? You think all those people left alive out there are going to say, "Oh, I'm sorry, it wasn't my fault! Let's kiss and make up!" ... We knew the score. We knew all about bombs, we knew all about fallout. We knew this could happen for forty years. Nobody was interested.
Advertisement:

The Day After is a Made-for-TV Movie written by Edward Hume and directed by Nicholas Meyer, made just after he filmed Star Trek II: The Wrath of Khan. It was first broadcast by ABC on November 20, 1983.

The film is set in and around Kansas City, Missouri and Lawrence, Kansas, which are in the geographic center of the United States. Initially it follows the daily lives of a number of locals: Kansas City physician Dr. Russell Oakes (Jason Robards) and his wife Helen (Georgann Johnson); Oakes's hospital colleagues, including nurse Nancy Bauer (JoBeth Williams), and one of his patients, expectant mother Alison Ransom (Amy Madigan); Joe Huxley (John Lithgow), a science professor at the University of Kansas; Stephen Klein (Steve Guttenberg), one of the students there; Harrisonville, Missouri farmer Jim Dahlberg (John Cullum) and his family; and U.S. Air Force airman Billy McCoy (William Allen Young), who's part of a launch crew stationed at Whiteman Air Force Base, home to a number of Minuteman II missile silos.

Things don't stay normal for long. The Soviet Union commences a military buildup in East Germany to intimidate the U.S. and NATO into withdrawing from West Berlin. The situation deteriorates rapidly, with unheeded ultimatums erupting into a shooting war that rampages across Western Europe, then quickly goes all-out nuclear after tactical nuclear weapons are employed.

The final caption of the movie is "The catastrophic events you have witnessed are, in all likelihood, less severe than the destruction that would actually occur in the event of a full nuclear strike against the United States."

The aftermath of the initial broadcast of The Day After had a profound effect on politics. Then-U.S. President Ronald Reagan, who viewed the film when it came out, was greatly disturbed and claimed the movie left him "deeply depressed" for a while. Keep in mind that at the time this movie aired, Soviet-American relations were strained to a level not seen since the 1962 Cuban Missile Crisis. In September of 1983, a Korean Air Lines flight from Anchorage to Seoul had accidentally entered Soviet airspace and, mistaken for a spy plane, was shot down with all 269 people on board (including a U.S. Congressman from Georgia) killed, prompting a sharp uptick in anti-Soviet sentiment in the West. Later that month, a Soviet Air Defense center received a false report of an incoming American ICBM; only the decision of the officer on duty not to pass the alert along to his superiors prevented a retaliatory nuclear strike against the U.S. And NATO's infamous Able Archer 83 exercise in Western Europe—conducted only a week prior to this movie's initial airing—was another close call, because the Soviets thought the exercise was an escalation of forces in Europe and that NATO was genuinely preparing to go to nuclear war with the Warsaw Pact nations. After attending a meeting with the Pentagon about nuclear weapons shortly after the movie was released, Reagan became further repulsed by the idea of nuclear weapons and he wanted to solve the Cold War peacefully with the Soviets from that point on. In 1987, not only was the film shown on Soviet television for the first time, but the Intermediate-Range Nuclear Forces Treaty was signed by the United States and USSR. The treaty banned nuclear and conventional ground-launched ballistic and cruise missiles with intermediate ranges. And what's more, during the talks, both Reagan and Gorbachev briefly considered signing a treaty that would have done away with all the US and USSR's nuclear weapons. Sadly this did not come to fruition because both leaders realized that the political will in their respective governments for such a move just wasn't there. In his memoir, Reagan directly mentioned a quote from the movie in relation about the signing.

In short, this movie literally ended the Cold War.

This film employs many of the same tropes as its UK counterpart, Threads, a much tougher-minded exploration of nuclear war's impact produced in response to The Day After. See also Testament, released the same year.

Not to be confused with The Day After Tomorrow.