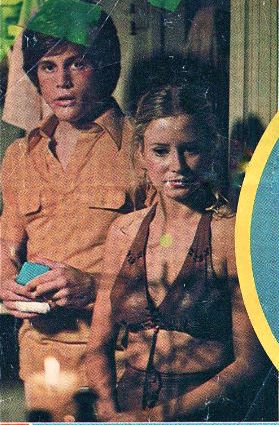 Dawn: Portrait of a Teenage Runaway is a 1976 NBC made-for-TV movie starring Eve Plumb of The Brady Bunch fame and Leigh J. McCloskey.

The film follows the title character, Dawn Wetherby (Plumb), as she runs away from her suburban home to Hollywood, California. She meets two friends along the way, Frankie Lee (Marguerite Delain), a prostitute who saves her from being robbed and seems to live a glamorous lifestyle, and Alexander Duncan (McCloskey), an artist and supposed liquor store employee. Alex invites her to stay at his apartment and the two become close friends and eventually start falling in love. Dawn feels guilty that Alex is supporting her, and is somewhat envious of Frankie Leigh, so she decides to meet with Frankie's pimp, Swan (Bo Hopkins). Alex tries to convince Dawn to quit multiple times, but Dawn enjoys the money she is now making. One night she gets a phone call for Alex and learns there is no liquor store and that he also works as a prostitute. When Swan spots Alex talking with Dawn one night as she is working, he tells her he has to leave him or he will have him killed.

A sequel, Alexander: the Other Side of Dawn, came out a year later, focusing on Alex and giving his backstory. In this film we see Alex was kicked out by his father and unable to obtain a job due to only being 15 years old. He meets a man who offers to take him in, who turns out to be a pimp. Alex reluctantly becomes a prostitute in order to survive. He winds up homeless, trying to get away from his pimp, and meets a famous football star named Chuck. Chuck offers to pay Alex to model for photographs and be his companion. Alex agrees but soon finds himself in over his head.

Dawn: Portrait of a Teenage Runaway and Alexander: the Other Side of Dawn contain examples of: