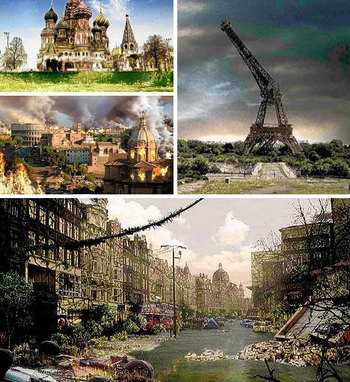 A montage of various locations (and their major landmarks), with or without their inhabitants, which are being catastrophically obliterated or soon to be. Usually depicts The End of the World as We Know It. A hallmark of Disaster Movies.

This is what happens when a villain Storyboarding the Apocalypse succeeds. Contrast Spreading Disaster Map Graphic, which likewise illustrates a catastrophe's scope, but at a resolution that's too large-scale to show individual landmarks. Likely involves lots of Scenery Gorn.

This trope is inherently spoileriffic, be wary!