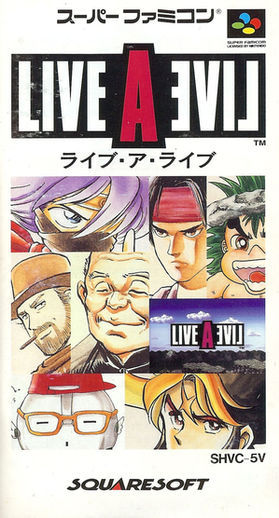 Live A Live (stylized as LIVE A ƎVI⅃) is an Anthology Role-Playing Game by Square, originally released on the Super Famicom in 1994. It was the directorial debut of Takashi Tokita, who would later go on to direct other Square classics such as Chrono Trigger and Parasite Eve, as well as the first Square title where Yoko Shimomura served as the composer.

The game features multiple storylines set in seven time periods, with each providing a different setting and genre. Although the storylines are mostly standalone at first, they eventually combine into a single plotline. The chapters of the game each draw on influences from different sources, as wide and varied as '80s anime, spaghetti Westerns, fighting games, 2001: A Space Odyssey, and Alien, to name but a few. The game tends to play these tropes straight for the most part, but at times subverts them just as happily.

Live A Live deviates from the usual Squaresoft games when it comes to the battle system, being somewhere between standard Turn-Based Combat and a Tactics-style system. Although the battle system stays the same throughout the game, each chapter has its own distinct atmosphere and art style. They are, in chronological order:

Completing all the above chapters unlocks the final 8th chapter:

After that, the player decides which path to take...

Live A Live was never officially released outside Japan... until 2022, when a remastered version in the "HD-2D" style of Octopath Traveler and Triangle Strategy was announced for the Nintendo Switch, also featuring voice acting in both languages. Tokita returns as a major creative supervisor with Shimomura supervising the rearrangement of the soundtrack, even personally rearranging several tracks.

Compare Bahamut Lagoon and Treasure of the Rudra, two similar SquareSoft games from the same time period, and Final Fantasy IV: The After Years and Octopath Traveler, two later Square games with a similar format.

Not to be confused with the Haruhi Suzumiya episode "Live Alive", The Wavering of Haruhi Suzumiya story "Live A Live", Alive A Life, Date A Live, nor is the opposite of Kill la Kill.

Beware of unmarked spoilers! You Have Been Warned.

Live A Live provides examples of the following tropes: