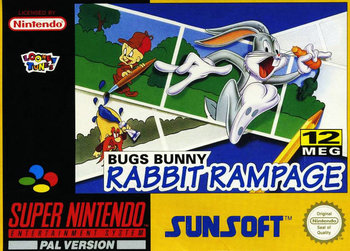 Bugs Bunny: Rabbit Rampage is a Looney Tunes Platform Game released for the Super NES in 1993 in Japan and in 1994 everywhere else. Loosely based on the 1955 cartoon of the same name.
Advertisement:

It stars Bugs Bunny, traveling through levels representing different types of Looney Tunes: Bugs fighting Elmer Fudd in the wintery woods from Duck! Rabbit! Duck!, the bull fight from Bully for Bugs, and many more.

Many of the game's mechanics play on Looney Tunes tropes, or just cartoon tropes in general. Bugs, for instance, starts every level by being drawn by a pencil (much like in the cartoon this game's named after) and is erased when he dies. In addition, items Bugs collects and can use to help him are based on common Looney Tunes items, such as pies he can throw as weapons, carrots that restore health (which is represented by a long carrot meter, with hits being represented by bites taken out of it), and a "Bugs Was Here" sign that acts as a checkpoint wherever you place it.