Finger in a Barrel 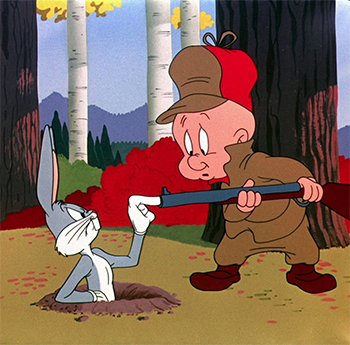 What if someone's pointing a gun at you at point blank and you're not Nigh-Invulnerable or Immune to Bullets? Well, you can hope the gunshot won't kill you, the gun fails, or, if you're in a cartoon, stick your finger in the barrel. Apparently, fingers are completely bulletproof. Despite being made of the same flesh and bone as the head and torso, the parts normally aimed at, fingers will apparently still prove more durable than the treated metal of the barrel if you stick the former into the latter. Who knew?

What happens is that the shooter fires anyway (even though they shouldn't). The victim and his finger are uninjured, the gun explodes, and the shooter is injured and has an Ash Face. Another variation can occur in which the character does stick their finger in the barrel anyways, but the fingers come out painfully throbbing. Things are very different in Real Life.

Subtrope of Television Is Trying to Kill Us and Guns Do Not Work That Way. One of the Tropes Examined by the MythBusters (multiple times, as apparently viewers were really unsure if sticking your finger in a gun barrel was safe or not).

Compare Bullet Catch and Banana in the Tailpipe. Barehanded Blade Block is the Sword Counterpart. Point That Somewhere Else works a lot better, and less riskier on your fingers.

Also see Reliably Unreliable Guns and Convenient Misfire when the gun fails without the finger.

Nothing to do with Finger Gun and Finger Firearms.

Obviously, in Real Life, a terrible idea. Trying this will almost always lead to the loss of a finger at the least, while the shooter and gun are unharmed.

Alternative Title(s): Finger In The Barrel