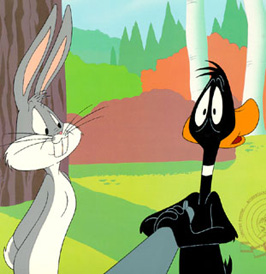 Daffy Duck once again successfully negotiates his way into a gunshot.
"You're despicable. Yes! You're despicable! And, and... picable! And you're very, definitely despicable! How a person can get so, so despicable in one lifetime is beyond me! It isn't though I haven't met a lot of people. Goodness knows it isn't that!"
— Daffy Duck
Advertisement:

A 1951 Looney Tunes short directed by Chuck Jones, featuring another attempt by Elmer Fudd to hunt Bugs Bunny, only with a new twist: this one also features Daffy Duck, and he and Bugs each spend the entire picture trying to get Elmer to shoot the other.

This short is quite possibly the most iconic Looney Tunes short, featuring the famous "Duck season!", "Wabbit season!" scene, and establishing the rivalry between Bugs and Daffy. This was not the first time that the two of them appeared in a short together — that distinction belongs to "Porky Pig's Feat" — but it was the first to have them both as major characters and audiences immediately loved their chemistry. It was the first in a trilogy of Bugs-Daffy-Elmer cartoons known as the "hunting trilogy," the others being "Rabbit Seasoning" (1952) and "Duck! Rabbit! Duck!" (1953). The duo proved so successful as a team that later cartoons, shows, and movies all paired these two up in one way or another. It's also the point where Daffy's persona changed from the screwball prankster, whose wacky-yet-clever behavior made him as formidable a foe for hunter-types as Bugs, to the often-greedy, selfish, bitterly sarcastic and jealous Daffy that's better known in modern times (in order to make Daffy a better foil for Bugs, rather than simply have two alpha personalities bounce off of one another). Daffy would revert back to his original personality in New Looney Tunes in 2018.

Example of:
The Hunter Becomes the Hunted