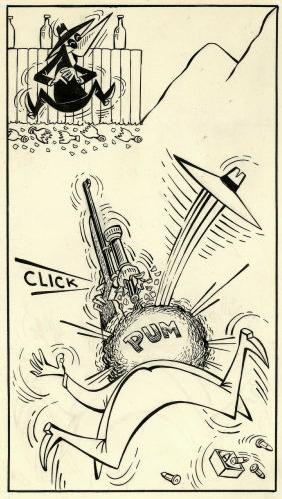 This is a comedy weapon trope (although there are dramatic examples) featuring a gun designed or modified to fire backwards, tricking the person who uses it into shooting themselves. A common version seen in cartoons is to bend the barrel back into a "U" shape. Note that this trope may still come into play even if the person who might fire the gun would have to be really stupid not to notice the modification.

These guns tend to show up in cartoons and spy genre pastiches.

Despite the trope title, other projectile weapons, such as a crossbow or hwacha

, may be examples of this trope.

Compare Had the Silly Thing in Reverse.