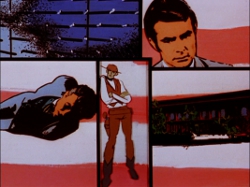 West and Gordon are assigned to protect Robert Raven (Harry Townes), inventor of an important new weapon. They soon discover that Raven is a member of a tontine - an investment group operating on the law of survival. A meeting of the tontine's members is imminent and several attempts are made on Raven's life as they travel to it; additionally, the agents learn that three other members of the group are already dead. They arrive at the meeting with the body count still rising and find themselves trapped in their host's house with a mysterious killer.