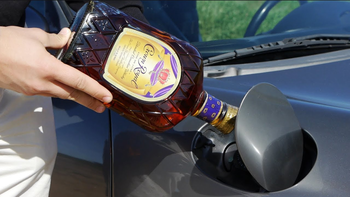 My car only gets the good stuff.
Ethanol fuel

for automobiles has been around since many decades — at least since 1978, when Fiat's Brazilian branch developed an ethanol-fueled Fiat 127

by taking advantage of its vast expanses of sugarcane that can be easily distilled into cane alcohol. While ethyl alcohol packs less energy per volume than gasoline, its many similar physical properties (low density, low boiling point, high volatility, very high flammability and very high anti-knocking index) have made it a very much viable fuel source for combustion engines, which can even be modified to use both gasoline and alcohol indistinguishably, to the point that all cars in Brazil are legally required to run on at least E25 (25% alcohol and 75% gasoline).
Advertisement:

However, ethanol fuel still has issues and pitfalls that have prevented its worldwide adoption. First, because alcohol is usually produced by fermenting agricultural crops, there is a very real possibility that a widespread adoption of ethanol fuel might greatly drive up demand of staple foods such as potatoes, corn, wheat or sugarcane and thus greatly increase their price, which could compromise the entire world's food supply; second, in order to run on alcohol, a whole series of engine modifications must be undertaken such as ignition timing re-mapping, special fuel lines, special injectors and alcohol-resistant seals and treatments; and third, because alcohol packs less energy per volume than gasoline, that means it has about 30% less fuel mileage.

And this is where fiction often falls flat at accurately portraying usage of ethanol fuel — from failing to acknowledge that running a gasoline-only car on ethanol fuel may corrode it internally and risk causing a catastrophic failure, to comically inaccurate depictions such as literally pouring a bottle of whiskey into a car and having it run normally.

Sometimes this is used as a gag about how ridiculously strong the liquor is. Another common gag is that the drink is so potent, using it as fuel actually causes the engine to run better (or at least faster) than it should be able to with regular fuel.