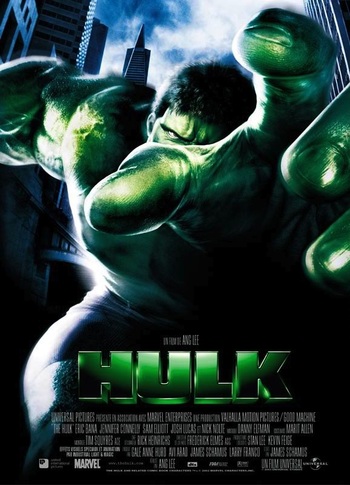 Gotta hand it to you, Hulk.
"I don't know who I am. I don't know what I'm...becoming. But I know one thing for sure: you wouldn't like me when I'm angry."
— Bruce Banner
Advertisement:

The 2003 film directed by Ang Lee is based on Marvel Comics' The Incredible Hulk.

Dr. David Banner was a researcher for the U.S. military finding ways to enhance soldiers genetically. Denied permission to use human test subjects, he began experimenting on himself, and later on his son Bruce, who inherited something from his father. Everything ends when Lt. Colonel "Thunderbolt" Ross discovers David's experiments. Then Banner sets off the military base's nuclear—and green—self-destruct mechanism before something happens with him and Bruce's mother, Edith...

Years later, Bruce "Krenzler" (Eric Bana) is an emotionally-repressed scientist at Lawrence Berkeley working on using a combination of gamma radiation and nanomachines for medical purposes. They can get the test animals to heal, but they keep exploding in cancerous growth. Adding to his stress are his coworker and ex-girlfriend Betty Ross (Jennifer Connelly) and her ex Glenn Talbot, who's trying to buy Bruce and Betty's lab from them on her father General Ross's behalf. Bruce takes the bullet for a lab tech who got trapped with a gamma-ray emitter about to go off and nanomachines in the air, and... wakes up later wholly sound. Well, better than expected; all of his minor aches and pains are now gone—still, he somehow survived when every frog that went through this exploded, and Talbot, Ross, and the weird new janitor (Nick Nolte) are all very interested in what Bruce has done.

See also the game based on this movie.

These tropes are unique:

Example of:
Going to Give It More Energy