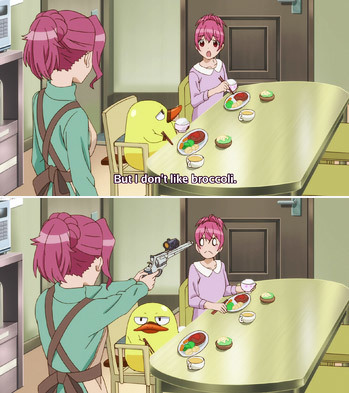 Some people really, really like guns. Maybe they're Compensating for Something. Maybe they see all problems as solvable with More Dakka. Maybe they just prefer to shoot first and ask questions later.

Mr. (or Ms.) Trigger Happy tends to have some (or all) of the following traits:

See also the whole family of people who have a little too much fun murdering people, i.e., Ax-Crazy, Chainsaw Good, Gatling Good, Knife Nut... Of course, even a mellow and sane person can sometimes find himself in a situation where the only thing to do is Shoot Everything That Moves. But if you're Trigger Happy, you'll enjoy it more. Despite being a commonly-seen trait of fictional Gun Nuts, Gunslingers and Crazy Survivalists, those tropes and this one are by no means mutually inclusive (famous movie Gun Nut Burt Gummer, for instance, is very, very strict when it comes to gun safety).

Compare/Contrast Orgasmic Combat and Combat Sadomasochist. Not to be confused with Trigger Happy TV or Trigger Happy Havoc. If the character in-question is trying to get retribution, and is willing to be rude and mean to get it, then they may be a Pushy Gun-Toting Villain. See also Hair-Trigger Temper, whose name is derived from gun triggers but doesn't always involve literal triggers.

In South Park, R. Kelly is portrayed as constantly drawing out his gun and threatening to shot people, if Tom Cruise & later John Travolta, don't come out of the closet.

In South Park, R. Kelly is portrayed as constantly drawing out his gun and threatening to shot people, if Tom Cruise & later John Travolta, don't come out of the closet.