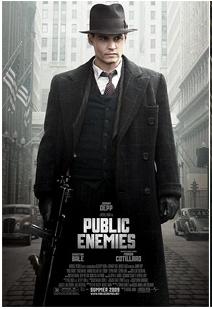 Public Enemies is a 2009 crime drama directed by Michael Mann and starring Johnny Depp as infamous criminal John Dillinger, who robbed numerous banks during The '30s and was pursued by Special Agent Melvin Purvis (Christian Bale).

Taking place in 1933, when Franklin Roosevelt took office in the midst of the Great Depression, bank robber Dillinger (Depp) and his crew of outlaws emerge as infamous thieves, brazenly stealing money from banks and being considered antiheroes by much of the disgruntled public.

After Dillinger breaks a group of allies out of Indiana's state penitentiary, the recently-established FBI, headed by J. Edgar Hoover (Billy Crudup), begins working on a case to take him down for good. Hungry for publicity in order to win over skeptical voices in Congress, Hoover assigns Purvis (Bale) to track down Dillinger. Meanwhile, Dillinger takes time out of his busy schedule to romance a hatcheck girl named Billie Frechette (Marion Cotillard).

The film was based on the book Public Enemies: America's Greatest Crime Wave and the Birth of the FBI, 1933–34 by Bryan Burrough, which covers all of the major bank robber gangs active from 1933 to 1936 and the FBI's work to stop them, including Dillinger, the Barker-Karpis gang, Bonnie and Clyde, and Pretty Boy Floyd.

Compare the 1973 film Dillinger or the 1945 film also called Dillinger, both of which have a far darker take on the notorious gangster.