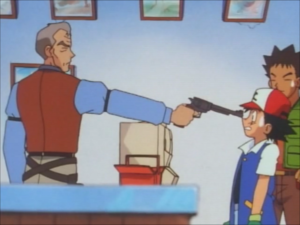 This is the reason why this episode is banned.

Japanese Title: The Legend of Miniryu

This episode was never aired in the US, or in many other areas using the 4Kid's dub due to featuring realistic firearms and a man who's willing to point them at children.

Ash and company reach the Safari Zone. They meet Kaiser, the warden and care taker of Safari Zone, who repeatedly threatens them with a firearm. He explains how the Safari Zone functions and what is the penalty to break the rules. He also visibly denies any rumors of a Dratini living in the Safari Zone, despite having a picture of it in his office. Professor Oak reveals to our heroes that Kaiser had once spotted and befriended Dratini in the area 30 years ago, but its presence in the Safari Zone lured a myriad of trainers intending to catch it, causing the Safari Zone to be nearly destroyed in the process; hence why the use of regular Poké Balls is now banned and why Kaiser is so hostile. He then demands them to catch as many Safari Pokémon as they can since he hasn't gotten any Pokémon recently from Ash.

As Ash and company enter the Safari Zone, Team Rocket appears and challenges them to contest of catching Pokémon in the Safari Zone. If Ash loses, he has to give up all of his Pokémon, including his Pikachu. Ash agrees to the challenge despite Brock's protest, since the good guys always prevail. On the open plains, he and his friends use Safari Balls to catch the wild Pokémon found here, but the stampeding Tauros herd always gets in the way. However, it turns out that Team Rocket's challenge is merely a ruse to distract Ash and company from their real goal, getting the location of Dratini out of Kaiser. Through several interrogation methods, they discover that Dratini is located in Dragon Lake.

Realizing that Dratini is in danger, Kaiser goes to Ash and his company for help and directs them towards the lake where Dratini lives. There they find Team Rocket who, after initially failing to capture the rare Pokémon the old-fashioned way, threw an electric bomb into the lake to shock Dratini, along with any other Pokémon, out of the water. Kaiser dives underwater in an attempt to disarm the bomb, and Ash, along with Staryu, dives after him. Staryu rescues Kaiser from drowning while Ash presses on to retrieve the bomb. Ash manages to get the bomb and heads towards the surface but runs out of air, sinking down at the bottom while a mysterious shadow passes by. As the gang begins to fear for the worst, a storm breaks out of nowhere and Dragonair breaks out of the surface with Ash on its back. It turns out the be the Dratini that Kaiser befriended, and the Dratini in the present time is its offspring. Team Rocket gets blasted off by the bomb and the lake is saved. Ash and company bid farewell to Kaiser, but not before giving Professor Oak the Safari Pokémon they have caught which, to his horror, are all Tauros.