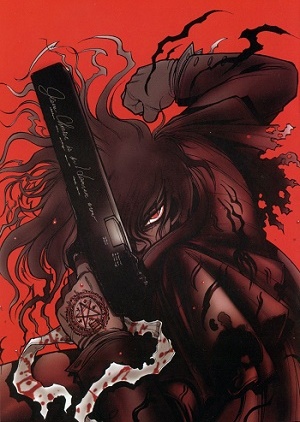 The Bird of Hermes is my name, eating my wings to make me tame.
"There are many immortal monsters who roam this Earth. When I look at them, I wonder, were they created out of a desire for immortality? Many of them desire war. I've seen them roaming the bloodiest battlefields, but in their battle cries, I hear a craving. I think they cry out, for death. Nosferatu, the No-Life King. His castle, his kingdom, its people, his loved ones, even his very identity; everything was lost. All that remains is a pale shadow, wandering from battle to battle. I have come to believe that those frightening immortals are, in fact, frail, sobbing children."
— Arthur Hellsing
Advertisement:

The Hellsing Organization (officially, the Royal Order of Protestant Knights) exists to protect Great Britain from the ghouls who prey upon the living — and their chief operative is the ancient and powerful vampire "Alucard". Alucard doesn't have to use guns (that have Depleted Phlebotinum Shells, Improbable Aiming Skills, and near-Bottomless Magazines) to pulverise other vampires or anyone else who gets in his way... but he damn sure likes to.

Alucard faithfully serves the leader of Hellsing, Sir Integra Fairbrook Wingates Hellsing. Her devotion to the Anglican Church and the Queen prompts her to swiftly erase any threats towards them from existence; she doesn't see a problem with employing the undead to destroy the undead. The same cannot be said of Hellsing's rival, the fanatical Section XIII Iscariot of the Catholic Church: the Iscariot consider Hellsing little better than the monsters they hunt, despise the Anglicans of England, and have a champion (the paladin Father Alexander Anderson) who is just as bloodthirsty and nigh-invincible as Alucard.

Into this blood feud stumbles Seras Victoria, the sole "surviving" member of a police squad killed by vampires. Alucard shoots Seras to save her from a fate worse than death — being turned into a vampire's ghoul — then offers her the choice of dying or becoming a vampire herself. Seras chooses the latter and lets Alucard turn her; as a consequence, she goes to work for Hellsing alongside Alucard. Although she mostly acts as comic relief (among other duties), Seras' weight as a character greatly increases in the second half of the story. Soon after Seras falls into the hellish nightmare of a war, Hellsing uncovers a plot of apocalyptic proportions hatched by a mysterious group called "Millennium" — one that threatens not just the United Kingdom, but the world as a whole.

Hellsing exists as the original manga by Kouta Hirano, which ran from 1997 to 2008 in Young King Ours magazine (released by Dark Horse Comics in North America), an OVA series that follows the plot of the manga (Hellsing Ultimate), and a television series (simply Hellsing). The television series and the first four OVAs were originally released by Geneon before the rights went to Funimation. A prequel begun in 2001, Hellsing: The Dawn, focuses on Alucard and a young Walter during World War 2. (Did we mention Alucard is a girl in that prequel?)

Has an abridged series made by Team Four Star, the guys who made Dragon Ball Z Abridged.

This page deals with the manga and its OVA adaption. There is a separate page for the TV series.

The Hellsing manga and Hellsing Ultimate OVAs contain examples of the following tropes:

open/close all folders
A-C
D-G
H-O
P-Z
Hellsing Ultimate (OVA) Only Tropes
Hold yer tongue, the dead don't speak. Do the dead dare walk the Earth before mine eyes? Will the undead raise an army, fall in, and advance with those who would abandon God and embrace the heretical order dare presume to meet mine gaze? Iscariot will not allow it! I will not allow it! You will be cut down like straw, trembling before my wrath! AAAAAMEEEEEEENNNNNN!!
Feedback

Zorin Blitz is killed by Seras Victoria, the very person she sought to target and kill. This, after mutilating her, killing her love interest Pip Bernadotte, and choosing to spend her time gloating and watching Seras suffer after the act, giving her the opportunity to drink Pip's blood and become a true vampire, which then leads to Zorin and her forces getting obliterated.

Zorin Blitz is killed by Seras Victoria, the very person she sought to target and kill. This, after mutilating her, killing her love interest Pip Bernadotte, and choosing to spend her time gloating and watching Seras suffer after the act, giving her the opportunity to drink Pip's blood and become a true vampire, which then leads to Zorin and her forces getting obliterated.