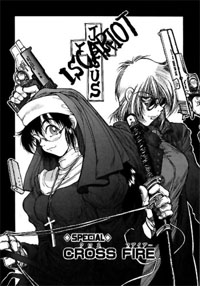 "Grace be with you all. Amen"
—Heinkel Wolfe.

Crossfire follows the adventures of Moe/Blood Knight Yumiko Tagaki, and gun-toting Bifauxnen Heinkel Wolfe, agents of The Men in Black-style Vatican Section XIII, also known as the Iscariot Organization. In their efforts to administer divine punishment, they slash and slaughter through three chapters of bloodshed and violence.

Unlike the Hellsing Organization, Iscariot works to eliminate every threat (active or not) to Catholicism. Pagans, heathens, and the like are immediately demoted to sub-human status and killed indiscriminately. Heinkel can get by with her gun skills but Yumiko, who oddly is a very sweet and gentle soul, has to revert to her much more bloodthirsty half, Yumie, when she has to get down to business. Needless to say, the end results aren't pretty after these two are done.

Iscariot operates under the presumption that it is God's instrument of divine punishment, and the cheerful spirit of this dogma can also be found in Hellsing's version of Section XIII.

Crossfire exists as an extra in the first three Hellsing volumes, but Word of God has said that it is not part of Hellsing canon (though oddly the characters do show up in that series).

Not to be confused with the 1947 film, the board game, or the CNN debate program(s).