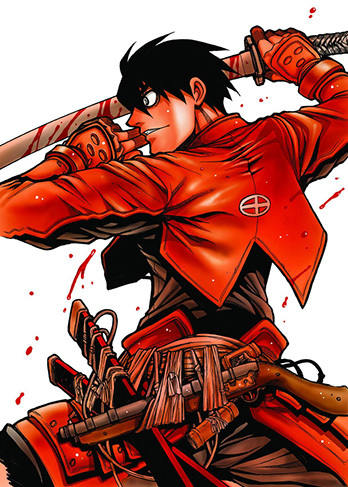 Got a love like a hurricane.
"This man really is a natural-born warrior. He has the power required of a leader in a time of civil war. The power to drive men towards the battlefield. The power called 'Insanity'."
— Oda Nobunaga
Advertisement:

Drifters is a manga written by Kouta Hirano (of Hellsing fame). It tells the story of the world's famous (or infamous, depending on how/what you know about them) historical figures yanked from their own times (usually on the date they were meant to die) and brought to a fantasy-like dimension to wage war against one another, for reasons yet to be revealed.

The heroes of the story are called Drifters, mainly composed of Shimazu Toyohisa, Oda Nobunaga and Nasu Suketaka Yoichi, though others are introduced as the story continues. Their opponents are the Ends who oddly enough are composed of people who weren't evil in their lifetime (Joan of Arc and Anastasia Nikolaevna Romanova for example) but nevertheless are cutting a swathe across the fantasy land. An organization of magicians, called the Octobrists (or the Oct), assists the Drifters in fighting against the Ends. And thus the stage is set for one of the oddest wars ever fought.

Drifters began serialization in 2009 in Young King Ours and is still ongoing. It was licensed in English by Dark Horse Comics (who also published Hellsing) and available for purchase in North America. It's also available in France, Germany, Italy and in Taiwan. Similar to Japan, three volumes are also officially available for sale in the respective markets mentioned. Funimation is the official distributor of the show in North America.

An OVA trailer was released with the last episode of the Hellsing Ultimate OVA. An Animated Adaptation debuted as part of the Fall 2016 Anime season as a TV show with 12 episodes.

All tropes applicable to characters must be moved to the characters page.

Example of:
Rape Is a Special Kind of Evil