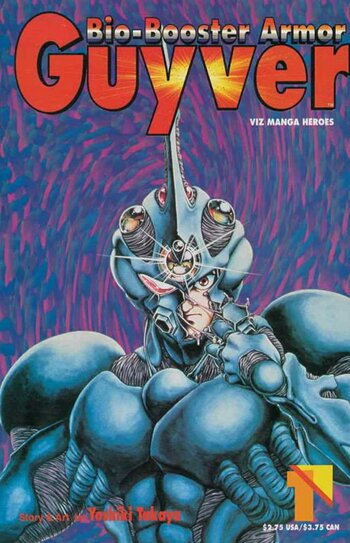 Sho Fukamachi was an Ordinary High-School Student with no real worries beyond moving along in school and trying to catch the eye of Mitsuki Segawa, the younger sister of his best friend, Tetsurou Segawa. That is, until he witnessed an explosion on a nearby mountain and came across a mysterious artifact which granted him the power to summon a suit of Bio-Boosted Armor called the Guyver.

An Evil Corporation called Chronos will go to any length, using any underhanded measure, to get back the armor, which has bonded itself to Sho. To help itself, Chronos has an army of modified humans, called Zoanoids, who can transform into monstrous forms with increased speed and strength, as well as the second suit of Guyver armor.

Originally a manga by Yoshiki Takaya, which began running in 1985 and is still currently serialized (32 volumes have been published so far), Guyver was first adapted as a 1986 OVA entitled "Guyver: Out Of Control". Next came the 1989 12-Episode Anime OVA series in 1989 Kyoushoku Soukou GUYVER, or Bio-Booster Armor GUYVER. A 1991 American live action film, The Guyver, costarred Mark Hamill. Its sequel, Guyver: Dark Hero, starring David Hayter, was released in 1994. Finally, a television series aired in Japan in 2005 under the title Guyver: The Bio-Boosted Armor (the Japanese title remains unchanged).

The most recent series can be viewed beginning to end from Funimation's website here.

As Takaya works without assistants, and has been suffering from chronic illness, the manga is released at an extremely slow pace. As of 2016 we have had no new chapters and an unofficial hiatus with zero content released.

The series is, at its core, an affectionate albeit Darker and Edgier tribute to the Toku series of the seventies, in particular Kamen Rider and Kikaider. Also, its OVA Out of Control has the dubious honor to be the first instance ever of Naughty Tentacles in a non-Hentai anime.

Not to be confused with MacGyver.