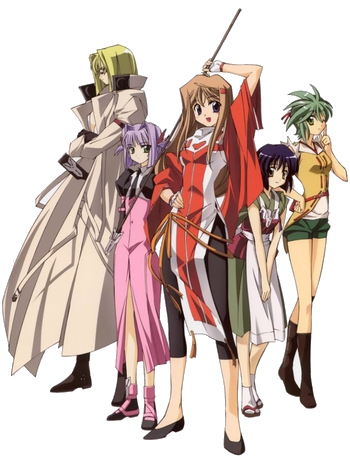 Jinki:Extend is a Humongous Mecha anime that aired in 2005. It is loosely based on Shirō Tsunashima's Jinki manga and its sequel Jinki: Extend, combining the general stories of both works to create a new entity altogether.
Advertisement:

At first glance, it appears to take itself seriously: A potential pilot (Tsuzaki Aoba) with no previous knowledge of the program is brought in and has to be trained in order to defend earth against the so-called Ancient Jinki. Apparently, a typical save-the-world type mecha series. However...

Jinki:Extend's opening animation is a direct Homage to the opening for the first Mobile Suit Gundam series (0079), and there are certain Gundam-style visual cues in the mecha battles. The series also included various homages, either in the form of characters, or visual cues to several other mecha series: Neon Genesis Evangelion, Martian Successor Nadesico, even Destiny of the Shrine Maiden.

Due to this, it is difficult to say much about the anime beyond the fact that its humor lies in its complete lack of originality. Jinki:Extend might not be the "Every Mecha Show Ever" series, but it certainly hits the major ones.

Visual Novel Developer Giga would go on to create multiple eroges in the franchise on PC, complete with art by Tsunshima himself. They include 2010's Jinki:Extend Re:Vision, a retelling of the Extend manga, 2020's Jinki Resurrection, a sequel to the Extend manga's Complete Edition, and 2022's Jinki Unlimited.

Not to be confused with Jinrouki Winvurga, his other work.