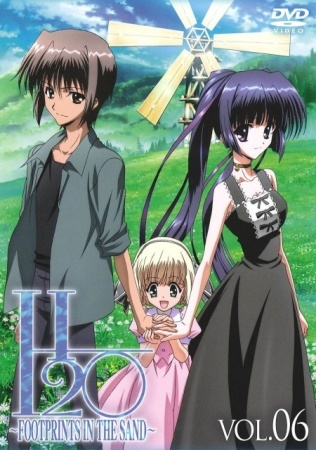 "Candy carries the taste of happiness. If you suck on it, a flower will bloom in your mouth."
Advertisement:

H₂O: Footprints in the Sand is an anime and Visual Novel centered around Hirose Takuma, a middle-school student who moves out to the country in order to recover from an illness. Said illness has caused him to go blind, even though the doctors cannot seem to find anything wrong with him from a physical standpoint.

Upon arriving at the country village, Takuma encounters the mysterious, yet energetic Otoha, the self-proclaimed "Spirit of the Sounds of Time." Otoha offers Takuma, whom she refers to as "The Promised One," his sight back, if only for a short while. Takuma also encounters the enigmatic loner Kohinata Hayami, whom the rest of the village treats with an obvious grudge, for reasons Takuma can't seem to figure out. Not even Kagura Hinata, the granddaughter of the village elder, seems willing to fill him in. As Takuma refuses to stop acting friendly towards Hayami, he sets into action a chain of events that may change the entire village.

A Visual Novel adaptation in the vein of CLANNAD and other KyoAni/Key works, though the best comparison themetically and plot-wise would probably be ef - a fairy tale of the two. The show itself starts off slow, and rather cliched. However, towards the middle, it improves quite a bit, as the backstory of the characters and the revelations about the village's past supplant the Harem Anime and Visual Novel cliches that littered the beginning. The ending is quite the Tear Jerker, in any case.

The Visual Novel was produced by Makura, with the animated adaptation put together by studio Zexcs in 2008. The anime has has been licensed by Kadokawa USA for an English release. The title comes from the names of the main heroines (Hayami, Hinata, Otoha) and the well known Footprints poem, which is used as the main theme.

H₂O: Footprints in the Sand provides examples of: