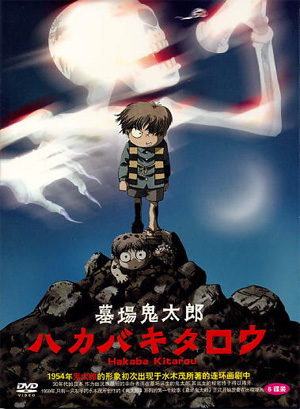 Hakaba Kitarō (Kitarō of the Graveyard) began life as a manga written between 1959 and 1969 by Shigeru Mizuki. Since then, the show has been adapted for television a total of six times, not counting live action works, all under the name of GeGeGe no Kitarō, as the word 'Hakaba' (graveyard) was considered too dark for television at the time of the first adaptation. The manga would not receive a direct anime adaptation until the release of the 2008 series, nearly 50 years later, and as such it's also covered here.

1950's Japan. A time of change but also of great inequality. In this era lives Mizuki, a man of modest means. His life changes for good when two members of the Yurei tribe move in next door. The couple is elderly, and hopes to live to see the birth of their son because they are the last of their kind. Unfortunately, the couple dies before this joyous occasion and Mizuki buries the mother.

Out from the grave crawls a boy, Kitaro. Mizuki originally intends to kill him, but cannot bring himself to do so. He adopts the boy, much to the joy of Kitaro's father, who has revived as a walking eyeball.

Kitaro is a strange child whom his classmates jeer at for his deformity (his missing left eye) and anti-social tendencies. Mizuki's mother cannot bear him because he seems to talk to himself.

Kitaro's sole joy is Cat Neko, a girl who turns into a cat when she smells or sees rats and fish. She has a beautiful singing voice which lands her a place on a local talent show when Kitaro suggests she become a singer.

This joy is short-lived. Through a series of tragic events, Kitaro finds himself heartbroken, homeless, and broke.

This only serves to fuel his bad behavior...

Tropes exhibited by this series include: