Visual Novel / Lamento - beyond the void 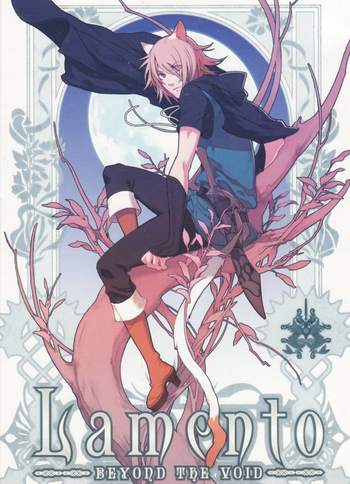 "Even if the world killed you, I would not forget you."
Advertisement:

Lamento - beyond the void is a Boys Love Game made by nitro+CHiRAL; it is noteworthy for featuring catpeople as characters.

The game takes place in a fictional world inhabited by a people called Ribika who look like humans but have cat ears and tails. Ribika has fallen into dark times - a mysterious void has made some places impossible to reach and most animals disappeared, causing major food shortages. There is an unknown and strange illness that has begun to plague the Ribika people; it has killed off a large percentage of the female Ribika population.

The hero, Konoe (who you guide through the game), lives alone in the starving village of Karou, where the villagers have turned to a lottery system of cannibalism. The victims are called "sacrifices" and are chosen by draw.

Konoe begins to have terrifying dreams of snakes, and one night wakes up with strange marks appear on his body and his beige ears and tail turned to black — the signs of a curse. To make things worse, Konoe is informed that he will be the next "sacrifice" victim. Konoe flees Karou and heads to the city of Ransen to try to find a way to rid himself of the curse...

The trailer for the game can be seen here