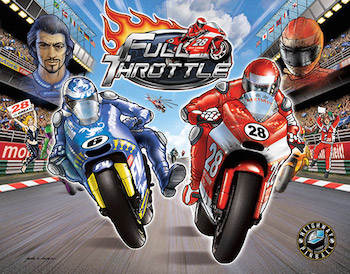 Be the Champion, Become a Legend!
Valentino: "You think you can beat me? Ha ha ha! Don't make me laugh!"
Advertisement:

Full Throttle is a Physical Pinball Table designed by Dave Sanders and illustrated by Jack Haeger and Ian Richardson. It is the debut pinball game from UK manufacturer Heighway Pinball, released in July 2015.

The player takes the role of an up-and-coming motorcycle racer who must advance through the ranks to become the World Champion. Light one of seven countries, start the race, then make all of the checkpoints to get first place. Between races, take on various Bike Challenges for bigger jackpots, collect Accessories for extra balls, and burn High Octane for a score-boosting frenzy. Watch the 10" LCD screen embedded in the playfield for your current status, but don't get distracted, because reigning champion Francisco Valentino is keeping his eye on you — and he's not giving up his title without a fight...