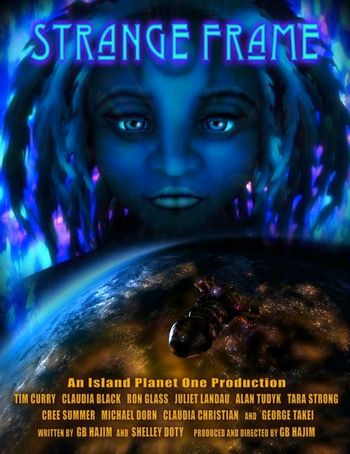 Strange Frame: Love and Sax is a 2012 cutout-animated film by GB Hajim and Shelley Doty. It was originally intended to be the first film in a tetralogy, though it is as yet unclear if the other films are still forthcoming. The film is set in the 28th century, where humans have abandoned Earth in favor of the Jovian moons, genetic and cybernetic enhancements are rampant to the point that the definition of what constitutes a human has been greatly stretched, and corporations have successfully brought back indentured servitude.

Love and Sax tells the story of Parker C. Boyd and Naia X, a pair of lesbian musicians who meet, fall in love, and form a band. When Naia is kidnapped by a predatory talent agent who wants to steal her personality and put it into a robot, Parker enlists the help of a pair of smugglers to rescue her.