Work Off the Debt 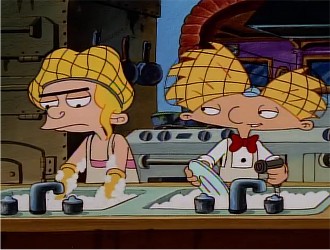 Characters go to a place where they are expected to pay money for something they have already consumed and can't return. However, they are unable to pay for some reason. The owner is called out and agrees to let them work off their debt.

A common setting for this trope are restaurants, where the characters will be required to wash up the dishes. Even though most modern restaurants have machines to wash dishes, the unfortunate victims will invariably have to wash up by hand. Usually unexplained is how the restaurant was going to get the dishes clean if no deadbeats showed up that night.

For some reason, this remains an Undead Horse Trope, even though, in most countries, a restaurant's only legal recourse to a customer being unwilling or unable to pay is civil action, which in almost any situation would be more expensive than it's worth. Additionally, there are likely certain legal problems involved with having someone working who is not actually on the payroll. No doubt a Shockingly Expensive Bill will be involved. Related to Trapped by Gambling Debts. Indentured Servitude is where this is formalized and legally enforced. Dine and Dash is an attempt at defying this trope.

Alternative Title(s): Working Off The Debt