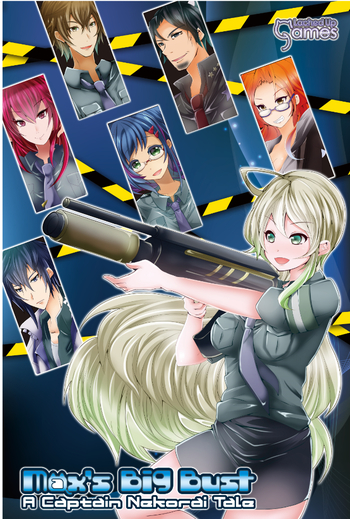 A visual novel from Transcendent Studios, the same people that made Gender Bender DNA Twister Extreme.

You play as Max, a police officer in the fictional Australian city of Axion City, assigned to investigate shipments of an illegal drug called MinX. After a large shoot-out and arrest, he finds a yellow marble that, upon investigation, causes Max to undergo a transformation, changing him into a busty woman with long hair. The game plays out as a standard visual novel for the most part, with minor decisions (like who to socialize with at certain points) being present to change what events play out, and how. However, there are also sections where the player undertakes actions akin to police work, such as investigating an area, or trying to deduce the right guilty party from a number of suspects. The game takes place roughly a year after the events of Gender Bender DNA Twister and includes several characters from it.

The game was finally completed and given a general release on February 4th, 2017.

A spinoff, Alluna and Brie was released in April 2019. A sequel, Max's Big Bust 2: Max's Bigger Bust, was initially released in October 2020 and completed in November 2021, with plans for more sequels announced on the date the final chapter was implemented.