Manga / He Is My Master 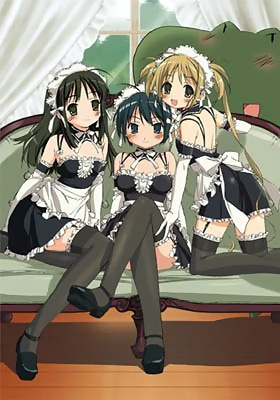 He Is My Master is a 5 volume manga created by former husband and wife team, writer Mattsuu and artist Asu Tsubaki. The manga ran in Monthly Shonen Gangan from 2002 to 2007, and it received an anime adaptation by Studio Gainax in 2005.
Advertisement:

Izumi and Mitsuki have run away from home and are looking for work. Where to go? They happen to stumble upon the house of 14-year old billionaire Yoshitaka Nakabayashi, who's looking for maids. Yoshitaka lets the girls stay and relax, but leaves them maid outfits to change into when they get out. Shortly before they leave, Izumi breaks a very expensive pot, and so she and her sister are roped in working to pay off their debt. Throw in a perverted alligator, a third maid from Yoshitaka's school (also a lesbian), and it all takes off from there.

Not to be confused with They Are My Noble Masters.