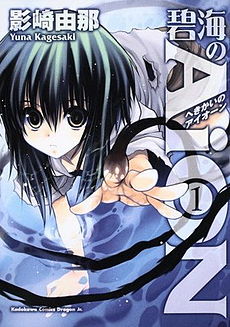 Hekikai no AiON is a fantasy and horror manga by Yuna Kagesaki, who is also known for Sakura no Ichiban! and Karin. The series was serialized in Dragon Age from 2008 to 2012, with 11 volumes. Three volumes of the series were translated in English by Tokyopop under the name Aion before it eventually closed its North American publishing division.