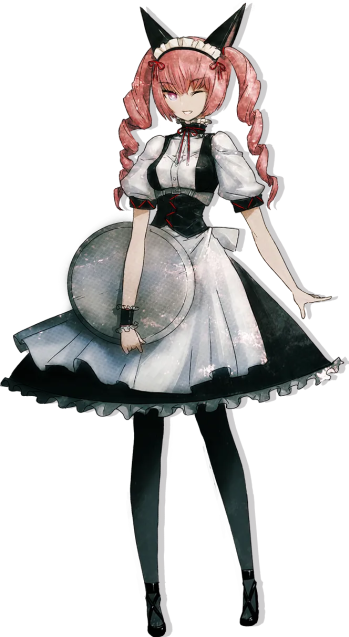 "A maid is a mythical being that all of us have heard about, but have never seen."
— ZUN
Advertisement:

In anime, the housekeeper is a girl or young, attractive woman with a frilled band in her hair, and is required by her employer to wear a housemaid outfit of variable taste like a dress, or blouse and skirt (often also an apron). Usually this runs more towards the "cute" end of the spectrum, although in seinen the main difference is how much shorter and more outlandish the skirt will be.

In general this type of character is used as a form of Fanservice, but usually not in the "sexy" sense as French Maid is. Rather this character tends to appeal to "moe", and is connected to the fantasy of a (theoretically) submissive girl or young woman who obediently cleans your room, cooks your meals, behaves well and dresses like the employer requires, and tends to your every need.

In a romantic series, a housemaid (or domestic service in general) is used as a socially acceptable excuse to put a young, romantically available female lead under the same roof as one or more (potentially wealthy and handsome, if not particularly socially adjusted) male characters. (Bonus if they are classmates with their new servant.) Because of this, this trope can appeal to young girls as well as men. It also inherently opens up issues of class or gender power disparity, as whoever hired her obviously has the income to spare money employing another person full-time, and has great leverage over their employee.

Meido in comedies frequently subvert expectations by being very (violently) dedicated to their jobs and (willfully) oblivious to whomever they look after. Others will have crushes on their bosses, whom they usually call goshujin-sama (master) or ojou-sama (mistress).

In extreme cases, a meido, or, in the case of a larger contingent of maids, the head maid, will be the de facto head of the household, while her hypothetical employer is treated either as too delicate to handle the management of whatever Fiction 500 financial empire earns them the money to hire the housemaids, or as too lazy and incompetent to be trusted with that power themselves. Especially in the latter case, they may behave more like strict (and disappointed) parents than employees. Expect these employers to have nothing better to do than to indulge in their childish whims. If children, the head housemaid may well behave like a stalker or abductor, purposefully sheltering their ward from anything that may take them away or "taint" them.

If the hypothetical head of the household is royalty or a head of state, the head housemaid might sometimes just be the Prime Minister, Interior Minister, Chief of Police, War Minister, and more all rolled into one.

Sometimes a female character will inexplicably wear an outfit which vaguely resembles a housemaid outfit. The chance of this increases dramatically if she is shown doing any housework. Also, more and more often, the housemaid is also a Robot Girl. (See Robot Maid)

If the meido in question happens to be an Action Girl as well, she gets instantly promoted to Ninja Maid.

Housemaids are a quick and semi-plausible excuse to introduce a character into a household, domestic experience notwithstanding. If a young heroine (lacking a college education) is suddenly destitute, then obtaining work as a domestic servant is historically the common solution.

Meido are of particular interest, insofar as they and nurses are among the very few Moe items that attract both Japanese and Westerners.

Compare to French Maid, the Hotter and Sexier origin of this trope. See also Elegant Gothic Lolita, a fashion style with similar appeal to meido. Guaranteed to occur in a Maid Cafe.