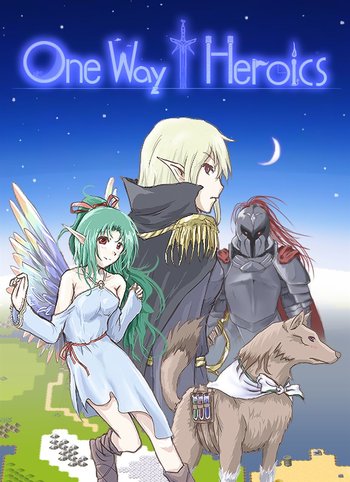 In One Way Heroics, you take on the role of an intrepid adventurer who must travel across the land and face the Demon Lord before a mysterious darkness engulfs everything.
Darkness always approaches from the left, and with each movement, attack and action you take, the darkness creeps ever closer. Forced to run right, you'll encounter any number of monsters, allies, thieves and shops on your desperate journey to stop the end of everything.
Advertisement:

Developed by Smoking Wolf using the Wolf RPG engine, One Way Heroics is an unusual Roguelike game with an interesting mechanic implemented to ensure progression and add a challenge: A wave of all-devouring darkness chases you as you adventure, forcing you to advance endlessly to avoid being destroyed as you seek to defeat the Demon Lord.

You can get the game on Steam here

. An expansion was released called One Way Heroics Plus, expanding the game in many ways, which can be found here

. A fanmade wiki has appeared here

A spinoff, Mystery Chronicle: One Way Heroics, was released in Japan on PlayStation 4 and PS Vita in 2015, with overseas releases for those two platforms as well as on Steam

to follow in summer of 2016. It is a crossover between One Way Heroics and Spike Chunsoft's Mystery Dungeon series featuring updated graphics, music, and voice acting. One Way Heroics Plus, meanwhile, was re-released on the Nintendo Switch in 2020.

Compare FTL: Faster Than Light, another Roguelike that has you fleeing from left to right.

Tropes associated with One Way Heroics: