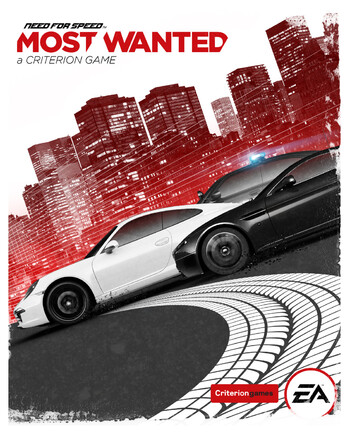 The 2012 game Need for Speed: Most Wanted, like the 2005 game of the same name, is a street Racing Game that is part of the overall Need for Speed franchise published by Electronic Arts. A more socially-focused, much less story-driven reinterpretation compared to the 2005 game, it was developed by Criterion Games. It was released on PlayStation 3 (with PlayStation Move support), Xbox 360note The only non-PC platform to have received both Most Wanted games, not counting the release of the 2005 game's PS2 version on PS3. (with Kinect voice support), Windows (mainly via the Origin service), and PlayStation Vita on October 30, 2012, with a Wii U version entitled Most Wanted U released in 2013. There was also a mobile version of that game developed by Firemonkeys Studios.

The 2012 game's plot is more bare-bones than the 2005 game. After a woman's voice welcomes you to the city of Fairhaven and tells you a bit about how things work there, you drive your Aston Martin V12 Vantage over Connors Bridge, past an inactive toll booth, through a pair of tunnels, and arrive in Downtown Fairhaven. Coming up to your first Jack Spot, you quickly switch over to a Porsche 911 Carrera S and have a duel with the Aston Martin that you just arrived in. After beating it (hopefully considering it's an easy race), the woman explains about mods, EasyDrive, Speed Points, billboards, speed cameras, smash gates, the police, and the Most Wanted List (this game's version of the Blacklist), you are then free to do whatever you want to go up the ranks to beat and earn the "Most Wanted" cars. Yeah, not much to work with really; Need for Speed: Most Wanted — A Criterion Game is really a Spiritual Successor to the also storyless and nonlinear Burnout Paradise. In fact, one could call it Burnout Paradise with licensed cars and police chases (it even has Takedowns).

The 2012 game's multiplayer mode plays differently in terms of progression and events. Cars are unlocked based on your SpeedLevel accumulated through Speed Points earned in all various main versions of the game in both single-player and multiplayer (rather than just finding cars at Jack Spots like in single-player), events are played though playlists of five events each, and public sessions are completely server-controlled, among other differences.

The PC version of the 2012 game was available for free from February 2016 to around mid-March 2016 through Origin's "On the House" program.

Alternative Title(s): Need For Speed Most Wanted A Criterion Game