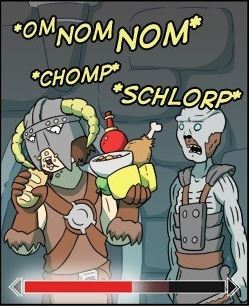 "In a rather morbid study, Canadian researchers observed thousands of people for 12 years, carefully noting when they kicked the bucket. Not surprisingly, the super-obese subjects died first, proving once and for all that all the video games where you gain more health as you eat more are not scientifically accurate."
— Cracked, 6 Slacker Behaviors That Science Says Are Good for You

Video game characters have long had the amazing ability to heal wounds through a good filling meal. One is left to conclude that the heroes in video games possess a Hyperactive Metabolism that digests food and converts it to the necessary proteins needed for bodily repair at superhuman rates.

Whenever one deals with a Hyperactive Metabolism, several main points show themselves:

To accommodate the hyperactive metabolism of their characters, it is not rare to see players carry 28 cooked sharks and eat them in the middle of melee combat in less than 30 seconds. Some players even call hurt characters "hungry"; despite an advanced magic system, healing comes from eating.

A corollary to this is the near-universal practice of having vampirism heal the vampire, to the point where health-draining effects are often called "vampirism". In actual vampire myth, bloodsucking had no such effect; vampires only fed on blood as humans eat food. This could have tenuous justification, as their metabolisms aren't being judged by the human standard. A vampire sucking blood to heal himself could make sense, if only because we can't really deny it. Other interpretations depict them as having enhanced metabolisms. The downside is that if they don't eat lots of food often, they begin to starve quickly.

This trope, although wildly exaggerated, is at least roughly based on how healing works in real life. Food's functional purpose is to fuel the body and provide substances that the body cannot synthesize on its own. People are told when they are sick to eat until they're full because a full stomach gives the body more calories and nutrients for repair. This trope also has fewer Unfortunate Implications than having the hero dependent on modern medicines such as pills and morphine to stay functioning, since that draws comparisons with drug abuse. That concern is less pertinent to potions and medicinal herbs because they are perceived as more "old-fashioned" and "natural".

Some games in which you control a vehicle, be it a Mech, a spaceship, or a car have a mechanic equivalent in which picking items as tools, a can of fuel, etc. will instantly repair them more or less, without needing a repair/maintenance crew.

Power-Up Food is the trope when food provides benefits instead of (or in addition to) restoring health.

Also known as Health Food. See also Healing Potion. When food instead recovers magic the trope is Cast from Calories. Often overlaps with Game Gourmet, when there is a wide variety of food for you to eat. Contrast Wizard Needs Food Badly, where the food is needed simply to prevent starvation, and Edible Collectible, where it's just for meeting collection objectives or Scoring Points. When a good rest restores health, it's Resting Recovery or Trauma Inn. Invokes Inappropriate Hunger.