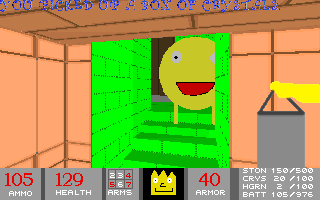 Shaw's Nightmare is a freeware Retraux First-Person Shooter for DOS and Windows PCs. It is about a little boy named Shaw, who fell asleep and began to have a nightmare. He must find his way out of the bizarre world, fighting strange creatures along the way.

The game is inspired by the original Doom, and is built using the Build Engine. It consists of four episodes each with nine levels, and was first released in 2013. It also received a Mission-Pack Sequel named Shaw's Nightmare II in 2016.

Both games can be downloaded at their website here

, or at IndieDB here.