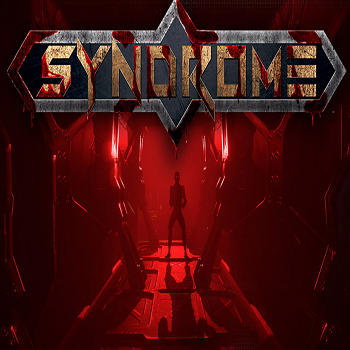 Syndrome is a Science Fiction Survival Horror game by indie studio Camel 101 (a team of 3 core developers and a few additional programmers and artists for assets and music). It was released on October 6th, 2016 for PC through Steam, then ported to Xbox One on September 29th, 2017 and to PS4 on October 6th, 2017.
Advertisement:

An engineer named Galen wakes up from Cryosleep with no idea of what happened. His ship, Valkenburg, is eerily quiet. Soon, you discover something terrible has happened. There are corpses everywhere, the robots have gone hostile, and the remaining crew went murderously insane before somehow being converted into horrific killer cyborgs.

You need to get off this ship, and you also need to find out what happened and what you're up against. Careful, though. The ship is packed with murderous cyborgs, so pick and choose your battles wisely. And when you can't fight, sneak.