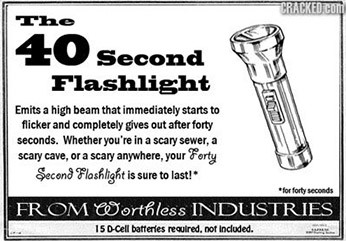 In video games where the player is given a flashlight, it will come in one of two flavors: its batteries run either forever or for a pitifully short time. This is the latter case.

Perhaps the batteries are near-dead, perhaps it's an inefficient light recognized as such in-universe, or perhaps it's simply a cruel trick being played on the player's avatar. Whatever the reason, few (if any) games have realistic flashlights with cells that last at least a solid in-universe hour before needing a replacement.

More shockingly, most Ten Second Flashlights will actually recharge their batteries by themselves, and often in half the time it took to discharge them. If it doesn't recharge, you may have to rely on your Muzzle Flashlight until you get a new one. Due to its nature, expect to be left in the dark by it in a Blackout Basement. If Darkness Equals Death, may lead to a Timed Mission where the player races for a safe lit location or a more permanent light source.

Typically, this kind of light source tends to shine brighter than an Infinite Flashlight, to compensate for the short runtime. See also Tentative Light for when a fading light is plot-relevant and not a game mechanic.