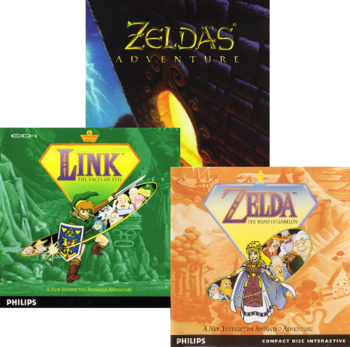 The Unholy Triforce
Link: Gee, it sure is BORING around here!
King Harkinian: Mah boi, this peace is what all true warriors strive for!
Link: I just wonder what Ganon's up to!
—The opening conversation of Link: The Faces of Evil.

The most infamous by far are the two sidescrolling platformer games reminiscent of Zelda II, both released in 1993. In Faces of Evil, Link had to travel to the island of Koridai to liberate it from Ganon's forces; Wand of Gamelon featured Zelda traveling to Gamelon to save her father — King Harkinian — and Link. The games are quite infamous on the internet due to their animated cutscenes, often regarded as hammy, bizarre, and unintentionally hilarious; as a result, they are one of the sources most often used for humorous remix videos known as YouTube Poop.

Less (in)famous is the top-down adventure game Zelda's Adventure, released in 1994 in North America and 1995 in Europe. In a reversal from the norm, Ganon has kidnapped Link and invaded the Kingdom of "Tolemac", plunging the Kingdom in an Age of Darkness. Princess Zelda sets out to save the young adventurer, and learns from the astronomer Gaspra that she must first collect the seven celestial signs before she can conquer the dark king and bring Tolemac to an Age of Lightness. Zelda's Adventure featured live action full-motion video cutscenes and pre-rendered sprites and backgrounds (primarily through a combination of live-action footage and surprisingly impressive model effects), and was generally more reminiscent of the very first Zelda game for the NES.

Believe it or not, these games are of genuine historical importance not just to the games industry, but to the entire global political and economic sphere. Specifically, this marked the very first time an American company outsourced work to Russian labor, representing a thawing in US-Russia relations in the wake of the Cold War's end on Christmas Day of 1991. Developers Animation Magic hired a team of four Russian animators to work on the cutscenes for The Faces of Evil and Wand of Gamelon, flying them into the States to work on the project. The end result was... distinctive, to say the least, but it was this of all things that became a significant touchstone in the post-Cold War era of global politics.