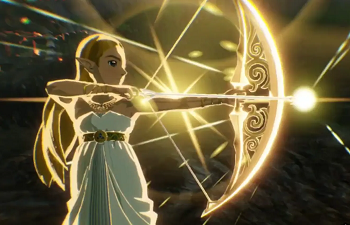 "Gilded bow and an arrow divine
The calamity ends when the trinity shines!"
"A bow that shines with sacred light. Blessed by the gods of the hunt."
— Description of the Artemis Bow, Final Fantasy Crystal Chronicles: Echoes of Time
Advertisement:

When the time comes to smite the powers of darkness, there is often no better way in the realm of fiction than to use the Sacred Bow and Arrows. A set of bow and arrows blessed by the gods is employed, weaponizing their holy power in the projectiles. Symbolic of this, the arrow will likely be fired in a streak of light, or the bow may fire an arrow of light. The medium may also depict bows as holy weapons in general, associating them with the gods and divinity.

Historically, bows are one of the oldest projectile weapons in history, going back thousands of years, and there are numerous gods associated with hunting and archery. The most prominent examples are the Greek gods Apollo and Artemis; Apollo is directly the god of archery while Artemis is the goddess of hunting, and both are commonly depicted wielding bows. In China, the invention of the bow is credited to the Yellow Emperor, one of the most important Chinese deities.