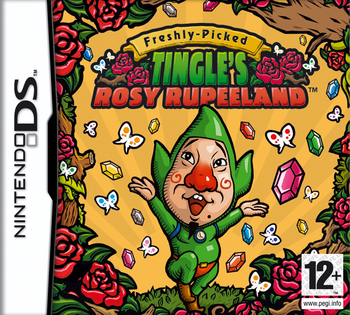 If you're still here, you're not American.
Freshly-Picked Tingle's Rosy Rupeeland is a quirky little game for the DS, starring Tingle from The Legend of Zelda. In it, Tingle is an ordinary 35-year old man living in what may or may not be Hyrule. One day, a mysterious Rupee-shaped character promises him entrance to Rupeeland if he collects enough Rupees, and changes his name to Tingle, giving him his classic green suit.
Advertisement:

Despite being generally well-received, it was only released in Japan and Europe because Americans Hate Tingle (if you want to play it, import it - it's region-free!). It received a sequel, Ripened Tingle's Balloon Trip of Love, which revolved around women instead of money; this was never released outside of Japan, but fortunately(?) an excellent English-language Fan Translation is now available.

There was also a Balloon Fight Clone-Spin-Off featuring Tingle released in-between the two.