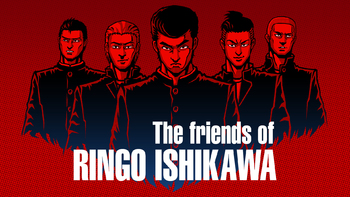 Ringo and his friends.
an existential open world game about japanese delinquents
—yeo

The Friends of Ringo Ishikawa is a 2018 Open World Beat 'em Up Action-Adventure Game with RPG Elements created by Indie developer yeo. The game focuses on the lives of a gang of delinquents in their last year of high school circa 1980s Japan. You play as the gang's leader and titular character, Ringo Ishikawa who's at a crossroads in his life as he tries to figure out what he wants for his future. Though, as the name would suggest, the story is far more focused on the lives of Ringo's friends.

The game is very reminiscent of classic 2D Beat 'em Up's like River City Ransom and Double Dragon, but it offers more simulation and RPG Elements akin to Persona and Yakuza. Despite having a prominent narrative, the game being open world allows the player to explore and do as they please in the small town. You can go to school, play video games, train at the local gym, or enjoy a cigarette and just do...nothing.

You can pick up the game on Steam here

, or on Nintendo's eShop here

The game's official site is here

. The game trailer is seen here

See Arrest Of A Stone Buddha and Fading Afternoon, other games made by yeo.

The Friends of Ringo Ishikawa provides examples of: